Skip to content
At the site of a tunnel project in Shandong, a company's newly purchased XCMG LW500KV side unloading loader was built day and night in 2017 to accompany the tunnel workers far away from home and working hard. 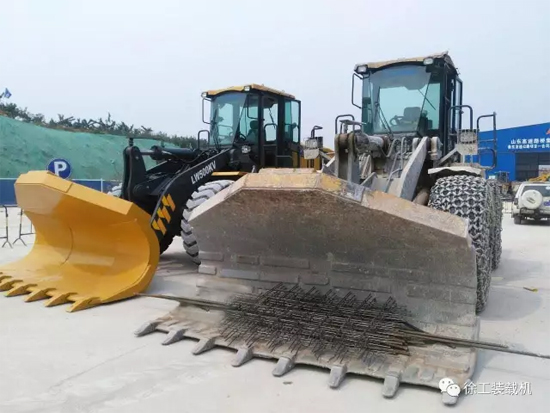 In the past two years, the XCMG V series loaders have gained fame. For the operators at the tunnel's first-line construction, the XCMG loader's luxurious interior and automotive-grade driving experience have long been a favorite topic. Prior to this, most of the construction teams of a large Shandong road and bridge company to which they were affiliated were still using other brand side unloading machines. Since the old equipment did not reach the update deadline, they had always been â€œXinxiangâ€ to XCMG. Immediately after the Spring Festival in 2017, a certain line construction team proposed a new side unloading loader demand. The local XCMG business personnel first used the excellent performance of the Xugong V Series side unloading loader as the starting point for the relevant engineering of the construction team. Customized a complete set of equipment solutions. Outstanding products and full-scale service make Xugong LW500KV side unloader successfully settled in the company.

The first XCMG LW500KV side unloading loader started at the beginning of construction in the city center. According to the construction requirements, it was necessary to enter the urban construction at night, the construction time was tight, and the equipment arrived on the day of construction, which also meant that In the late evening, the loader must be under construction at the time of delivery. The XCMG team actively responded to this situation by rationally arranging the team and service personnel and preparing for the delivery of the car early. Finally, it successfully delivered the well-tuned equipment to the customer at three o'clock in the middle of the night, ensuring the construction and fulfilling the promise to the customer. The customer was deeply touched and repeatedly praised the "XCMG loader!"

"I was the first to open such a comfortable loader." Master Li, a Fujianese, has been driving for nearly 15 years and has been leaving the home for a long time to follow the tunnel construction team. The XCMG loader is the longest â€œfamilyâ€ who accompanies him. â€œDrilling holes in tunnels has a small space. It requires a lot of flexibility for the loader, and for the driver, it is more flexible and hopes to be more comfortable. XCMGâ€™s This machine is very good in both respects. The cab is very spacious. It has a large spherical rearview mirror and has a good view. It is very helpful for accurately determining the surrounding environment in tunnel construction. Under the pilot operation, it is flexible and convenient, and the power of the entire vehicle is also good. Strong, poor construction of the tunnel environment, it can easily adapt to it, is really good, open the other brands of machine does not have this feeling." Master Li used a few "real good" to describe his "car."

As an old driver, Master Li is well-versed in the structure and performance of the side dump loaders in the industry. Master Li pointed at the brightly polished bucket and said: "The side dumper is most likely to have problems with side dump buckets and racks. The previously used car buckets and brackets were very thin and often cracked, seriously affecting the schedule. We are relieved to see you in the structure of Xugong. We are assured of the use of thick materials and reliable welding.

Brothers, we fight side by side

After several months of use, the image of the Xgong V series side unloading loaders was able to carry out heavy tasks and can bear heavy responsibilities. "Xugong has never "falled off the chain," and it is highly reliable, efficient, capable of rushing deadlines, and capable of making great efforts!" The company's manager Xu Zongqi praised. â€œThe most important thing for us to rest assured is Xugongâ€™s service. We will spare no effort in the entire process. We will immediately purchase new equipment. We will set up a Xugong side unloading loader! The crowd is loud and we have no choice.â€

In recent years, XCMG's side unloading loaders have continuously updated their historical records and are becoming an indispensable part of the development of XCMG loaders.

It is suitable for the spinning of various substrates such as aluminum plate, copper plate, iron plate, stainless steel plate and steel plate for lamps, cookers and crafts. The batch production of a series of products such as barrel type, cone type, parabolic type, horn type and warhead type can be finished.