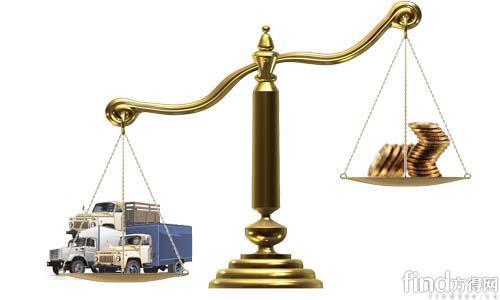 On December 3, the Politburo meeting clearly stated that monetary policy has shifted from moderately loose to robust, confirming the first conclusion on the inevitable turn of monetary policy issued on November 24 of this series. Some people in the industry believe that the change in national monetary policy is like a car driving on the brakes. It will only slow down the speed. How can it lead to a 50% drop in the heavy truck industry?

If a car is in a normal driving condition, the result of braking is only deceleration. However, people who know about the car know that there are situations in which the brakes may cause disasters, such as driving a car without ABS on the ice, heavy trucks under steep slopes, trucks with uneven loading of cargo Traveling on uneven roads; cars driving at high speeds turn sharp; cars without a stable braking system travel at speeds above 200 kilometers.

There is another kind of car, just like the bus with a bomb in "Life and Death Speed" - a commentator put it like this: "China is like a bus with a bomb running on the road, and once the speed is less than an hour In 50 miles, it will explode.If China's economic growth rate is less than 8%, disasters may happen.Most of the newly built infrastructure will be idle, excess production capacity will exist in many industries, and the real estate bubble will burst. The banking system will face large-scale bad debts. Investors who are immersed in the Chinese dream underestimate these potential risks. Once Chinaâ€™s giant machine eventually stagnates, these investors will wake up from their dreams.â€

China's economy is like a high-speed car, but the car itself has unbalanced loading and some mechanical problems, and the external road conditions are extremely complex. At this time, regardless of any policy changes made by the central government or continuing to allow quantitative easing policies (increasing interest rates, bank deposit reserve ratios, reducing the scale of credit, etc.), there are considerable risks. As early as the March 16 press conference of the National People's Congress, Premier Wen Jiabao of the State Council said: â€œThe huge problems in the Chinese economy are still structural, unstable, unbalanced, uncoordinated, and unsustainable issues. , that is, high investment growth rates, excessive credit supply, excessive currency liquidity, and imbalances in foreign trade and international payments.â€ The countryâ€™s governance of the above issues in 2007 was accompanied by the outbreak of the global financial crisis in 2008 and the economic decline in China. And stop. The policy orientation of the state's "structural adjustment" has become "promoting growth." A large number of economic stimulus policies are superimposed: a large number of currency issuance, substantial reductions in interest rates and deposit reserve ratios, 4 trillion investment, allowing local government debt, preferential interest rates for second-home suites, automotive home appliances, and trade-in replacements. ... These various "smart drugs" that stimulate the economy have all led to Wen Jiabao's intensification of the four "noes" in China's economy. Moreover, excessive currency additions and excessive credit have directly caused inflation that has not yet occurred in 2007.

On December 3, at the 7th annual meeting of China Finance, Professor Wang Wei, director of the Department of International Business at Lingnan University, Sun Yat-sen University stated that the official statistics on inflation were underestimated. According to the growth rate of M1 (narrow money) in 2010 reaching 21%, it is speculated that the compound underlying inflation caused by the currency increase in China can reach more than 30%.

It is precisely because the huge contradiction between the "big" productivity of our country and the "small" consumption capacity of the working people has become very prominent. Therefore, a stable monetary policy against inflation may make it unsustainable to invest in sustained high-speed growth. Once there is corporate funding, If the chain breaks, it will trigger a wider range of production cuts and unemployment, and the spending power will drop rapidly. When the contradiction between production capacity and spending power cannot be reconciled, it may trigger an economic crisis, or a recession.

This chapter will focus on the analysis of the root causes of the economic downturn - the contradiction between overproduction and underconsumption in China.

Purchasing power decreased year by year On December 7, Ji Ning, deputy director of the Employment and Income Distribution Department of the National Development and Reform Commission, said that China should establish and improve eight categories of measures, including normal growth in wages and payment guarantee mechanisms, and accelerate the adjustment of the distribution of national income. The previous day (December 6th) China Daily also quoted Su Hainan, a researcher from the Ministry of Human Resources and Social Security, as saying that in the next five years, the proportion of household income to Chinaâ€™s gross domestic product (GDP) should increase by four to five. Percentage.

So, what is the current proportion of residents' income in GDP? According to the 2009 China Statistical Yearbook, the author calculated the following table: 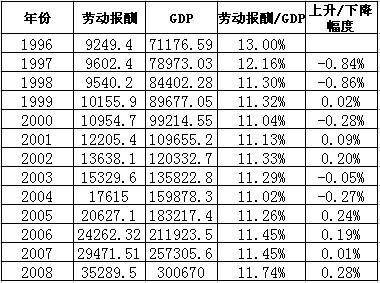 The proportion of Chinaâ€™s total wages to GDP is not only vertically lower, but also horizontal and other countries in the world, and it is also at a low level. In market economy countries, the total wages of workers as a percentage of gross national product (GDP) are generally between 54% and 64%, the US is 50%, and the EU is between 55% and 65%. The consumption rate in China is about 30 percentage points lower than the world average and about 20 percentage points lower than the average level in low- and middle-income countries.

More stringent than the figures on the table, not only has the "proportion of total wages" been declining year by year in the past 20 years, but social security is also far worse than before. People who experienced the 1970s and 1980s knew that while the wages of the workers were low, the rent was very low and the doctors did not spend money. The primary and secondary schools were also free and had no choice of school fees and high remedial expenses. The university was also exempt. Or low tuition (when the author went to college in the 1990s, the tuition fee was only 200 yuan per year). At that time, cadres and workers can get 80%, 90%, or even 100% of their salaries after they retire (when participating in social security retirement, the wages will be substantially reduced).

Faced with such a low proportion of wages and heavy burdens (housing, education, medical care, and pensions), the working peopleâ€™s spending power is even more compromised.

The economist Lang Xianping pointed out in 2009 that "China's household savings are only 25 trillion yuan (the figure at the end of 2008 was 21.79 trillion yuan, "China Statistical Yearbook 2009", note by the author), divided by the population of 1.3 billion, per capita savings are less than 20,000, then deduct 1% of the rich, per capita savings may be only a few thousand, and insufficient social security also makes everyone afraid to spend."

The above is only the overall level of the income of our residents. If we take into account the large gap between the rich and the poor, then the average citizen's spending power is even lower. On December 8, Zheng Gongcheng, director of the China Social Security Research Center, proposed at the summit forum for national income distribution and corporate overall compensation system that it would strive to reduce the Gini coefficient to less than 0.45 during the â€œ12th Five-Year Planâ€ period. According to estimates by the World Bank, Gini coefficients between European countries and Japan are mostly between 0.24 and 0.36, while Chinaâ€™s 2009 Gini coefficient is as high as 0.47, ranking 36th among the 135 countries announced, close to Latin America and Africa. National level. (According to relevant organizations of the United Nations, if the Gini coefficient is lower than 0.2, it means absolute income; 0.2-0.3 means relatively average; 0.3-0.4 means relatively reasonable; 0.4-0.5 means that there is a large income gap; and 0.6 or higher means that the income gap is very different). Recently, there are reports that Chinaâ€™s Gini coefficient in 2010 has exceeded the international warning line of 0.5. Wang Xiaolu, deputy director of the Institute of National Economic Research of the China Reform Foundation, said on November 17 that if it counts grey income, Chinaâ€™s current Gini coefficient may be Has exceeded 0.6.

In response to the low income of Chinese workers and the recent serious increase in prices, the title of an article in the Peopleâ€™s Daily on December 9 is: â€œWith less money, life is equally wonderfulâ€. Even if this view is desirable, the people spend less money and their lives are equally wonderful. However, from the perspective of the whole society, is the demand not even more inadequate?

Nickel is a versatile, highly corrosion resistant element that will alloy with most metals. Due to its corrosion resistance, nickel is used to maintain product purity in the processing of foods and synthetic fibers. It is highly resistant to various reducing chemicals and is unexcelled in resistance to caustic alkalies. In addition, nickel has good thermal, electrical and magnetostrictive properties. Relatively high thermal conductivity of this metal has lead to its frequent use for heat exchangers

Commercially pure or low-alloy nickel may contain very small amounts of alloying elements to absolutely none. By contrast nickel alloys contain significant amounts of added elements. Nickel and nickel alloys are both non-ferrous metals that are useful in a range of applications, most of which involve corrosion resistance and/or heat resistance.